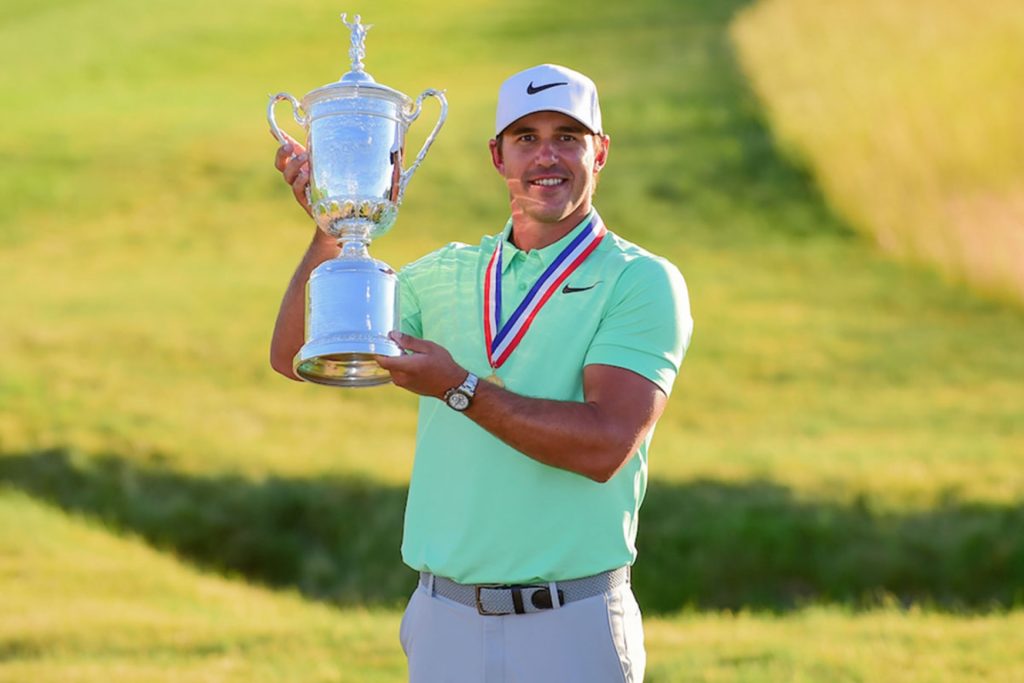 Brooks Koepka captures his maiden major title at the US Open

It was a Sunday evening to remember at the 117th US Open Championship as Brooks Koepka broke away from a chasing pack with three straight birdies on the back nine, to close with a 5-under par 67, to win his first major championship.

No one was more solid from start to finish than Brooks. He opened with a pair of tap-in birdies and putted for birdie on every hole but the par 3 13th. Of all his birdies, an 8 foot par putt on the 13th hole might have been as big as any. This gave him the confidence and momentum to slot in birdies on the next three holes.

“I think that was kind of the changing point of the round for me. I needed something to go in and see that to build momentum off it, and I just carried that over,” Koepka said.

A par on the final hole tied the US Open record score to par at 16 under for a four-shot victory. He became the seventh straight first-time winner of a major championship, and it was the first time since 1998-2000 that Americans have won their national championship three straight years.

“What I’ve done this week is amazing,” said Koepka.

Brooks’ reaction was low-key, just like that of his close friend and last year’s U.S. Open champion, Dustin Johnson. They spend quite a lot of time together both on and off the course, so Koepka has seen that U.S. Open trophy plenty.

When asked about what had been going on inside his head for the closing round at Erin Hills, Brooks said that he was “just staying in the present and thinking about one shot at a time’’.

“Dustin actually called me last night and told me the same thing, just stay patient. Just keep doing what you’re doing, you’re going to win the thing, and just don’t get ahead of yourself. A bunch of people told me that”, Koepka said.

Sunday capped off quite a journey for the 27-year-old Floridian. Without a card on any tour when Koepka got out of Florida State, he travelled far and wide to places such as Kazakhstan, Kenya, India and the rest of Europe, competing on the European Challenge Tour.

It was on the Challenge Tour that Brooks claimed his maiden professional victory, at the Challenge de Catalunya in 2012. This was followed up by 3 more wins the next season at the Montecchia Golf Open, Fred Olsen Challenge de España and the Scottish Hydro Challenge. These 3 wins granted Brooks a European Tour card for the 2013/2014 season.

In 2014, Brooks claimed victory at the Turkish Airlines Open on the European Tour by 1 stroke over Ian Poulter. This victory along with third places finishes at the Dubai Desert Classic and the Omega European Masters saw him finish 8th in the Race to Dubai rankings and be named the European Tour’s Sir Henry Cotton Rookie of the Year.

He then went on to win on the PGA Tour, this time at the Waste Management Phoenix Open in 2015. This hoisted Koepka up to 19th in the Official World Golf Rankings.

Another win came for Brooks at the 2016 Dunlop Phoenix Tournament in Japan, which showed how much of a world class player he is.

Brooks’ worldwide golfing odyssey over the last few years has culminated in this US Open Victory and we could not be any prouder of him!

Image courtesy of Golffile – single use only with associated press release