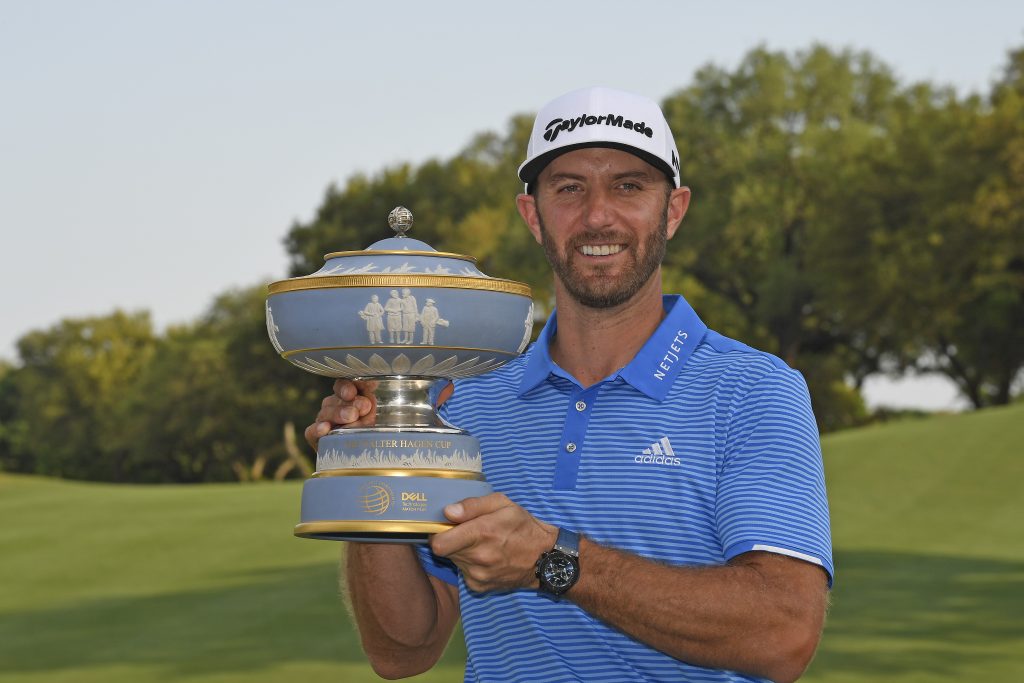 Dustin Johnson, a golfing machine with no discernible weakness and hardly any pulse, won the World Golf Championships-Dell Technologies Match Play on Sunday for his third straight victory and made him the first player to complete the WGC career slam.

The final day lasted longer than he may have wanted, but the outcome was what everyone expected.

Johnson stretched ahead by winning four holes in succession from the 3rd tee. Yet Rahm displayed the tenacity which served him so well all week by holing from off the green at the 7th before winning both the 9th and 10th to keep Johnson just about within view.

A key moment looked to have arrived at the 11th, Johnson saving par and a half from 6ft as Rahm looked to impose himself further on the match. Johnson claimed the 12th to move to what appeared the unassailable position of four up with only six to play. Appeared proved the operative term.

Rahm roared again with victory on the 13th after he found the green from the tee of the par-four hole. Rahm also took the 15th, leaving Johnson two up with three to play. At the 16th Rahm brilliantly holed from 31ft, meaning Johnson was suddenly only one hole ahead with two to play.

An engrossing duel rumbled on to the 18th, Rahm overshooting the green from 368 yards away with his tee shot before leaving a chip 25ft short – he was not helped by a loud noise when mid-swing. Johnson duly made par as Rahm could do no better, leaving the world No1 as the champion by the most slender of margins.

Not once did Johnson trail in his 112 holes over seven matches. And while you might not have heard much about his semifinal combatant Hideto Tanihara (a 14-time winner in Japan and no slouch) he also destroyed major winners Webb Simpson (5 and 3), Martin Kaymer (3 and 2), Jimmy Walker (5 and 3) and Zach Johnson (5 and 4) and took out world No.10 Alex Noren (3 and 2). Johnson secured his final spot with a last-four victory over Hideto Tanihara. In that match he continued a stunning run of winning the opening hole at Austin Country Club in six matches out of six.

“Pretty awesome,” said Johnson after his dominant week. “Definitely kind of cool to be the first one to win all four. These are the biggest events besides the majors, with the best golfers in the world. I feel like there will be some more to do it, but I’m very, very pleased with it”, he said.

When John Rahm was asked about Johnson’s abilities after the final, he said, “It’s amazing how he’s able to keep cool the entire round. It amazes me. And he’s just a perfect, complete player. Honestly, he doesn’t really make mistakes. I think he’s learned from what he’s done in the past and he’s embracing it now and that’s why he’s winning tournaments.”

Johnson says 95 percent of the time golf doesn’t feel easy. But right now the other five percent is in play.

“I believe in my ability. And I know what it takes to win out here,” he said ominously.

“Some days it’s easier. I feel like when you’re rolling in putts, that’s when the game gets pretty easy.”

In the last two starts at Augusta National Johnson finished T6 and T4… so he’s trending up.

Most have instilled him as a prohibitive favorite to add a second major as he seems impervious to nerves. But Johnson admits he still gets them.

“I want to win, it means something to me, so yeah I get nervous,” he says.

“It’s not going to be any different for me (going forward). I’m still going to prepare like I always do and go out and try to play the best I can.”

“The Masters is always a tournament that I look forward to every year. I’ve actually played good there the last two years. I’m excited to go back when the game is in good form. I feel like everything is working pretty well.”

Johnson is now slated to play at the Shell Houston Open next week before taking his talents to the Masters. But keeping on a roll like this is very hard. The last player to win at least four in a row was Woods in 2007-2008 (he won five).

Congratulations DJ on yet another victory, and on writing your name in the history books. All at Hambric Sports are so proud of you.

Article courtesy of the PGA Tour