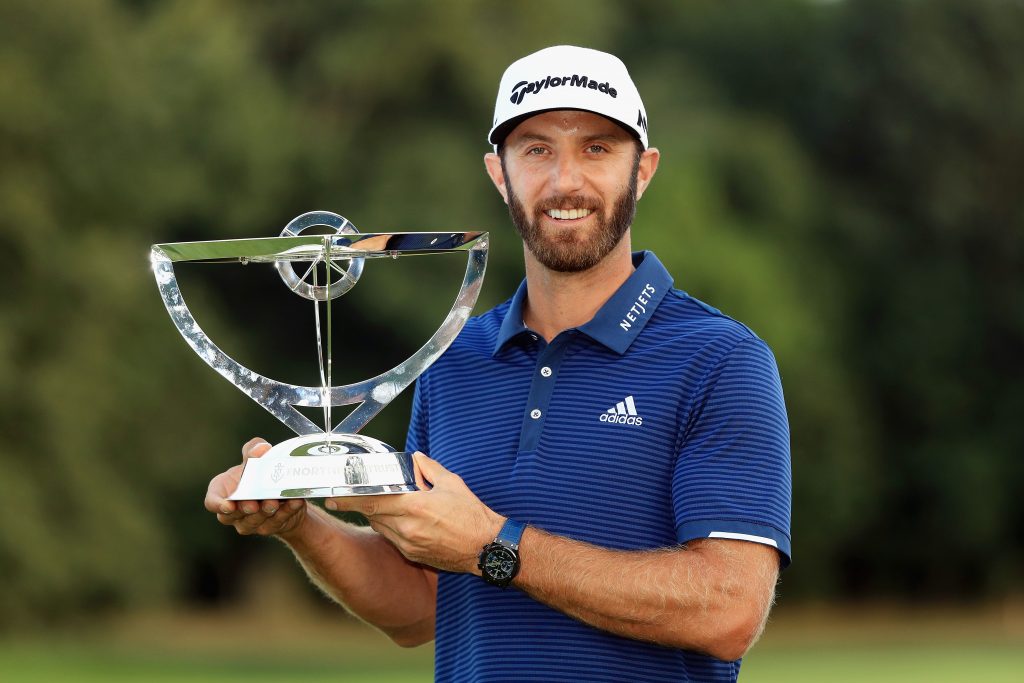 At the opening leg of the FedExCup Playoffs, Dustin Johnson overcame a five-shot lead held by Jordan Spieth, to claim victory at The Northern Trust.

A battle along the back nine with big shots and big moments, Johnson and Spieth were tied on the par-3 17th when both hit into a bunker. Dustin blasted out to 4 feet and tapped in for par. Spieth had 18 feet for par and knocked it in.

Now it was down to the 18th hole. Spieth’s drive found the fairway. Dustin, meanwhile, hit his drive slightly right and had 210 yards to the hole from the right rough. He opted to lay up, instead of trying to hammer a shot to an elevated green.

“What am I doing?” he said, adding, “I hit myself in the worst possible spot that I could. Even if I aim left and cut it and it goes in the bunker, a much better position than I am in the right rough with 210 yards to the hole. I mean, I’ve got no chance. I just couldn’t get to the green with the lie I had.”

Needing to hole a 25 foot downhill putt to force a playoff, as Spieth had 3 feet for par, he did so with a perfectly measured putt.

They both finished at 13 under par, with Dustin shooting a final round 66 (4 under).

Returning to the 18th hole for the playoff, Johnson took on the lake and bombed a 341-yard tee-shot, the longest of the week on that hole, that left him with just a lob wedge to the pin. Spieth hit his 7 iron to the back collar of the green and missed 25-footot birdie putt. Johnson had 4 feet for the win, and calmly rolled it in for the victory.

“I feel like the game is finally back in form like it was before the Masters. We were having fun,” said Johnson, the new FedExCup leader.

“Obviously I had a little bit more fun at the end of the day after I won the playoff.”

Congratulations Dustin on your fourth win of the year – phenomenal golf!