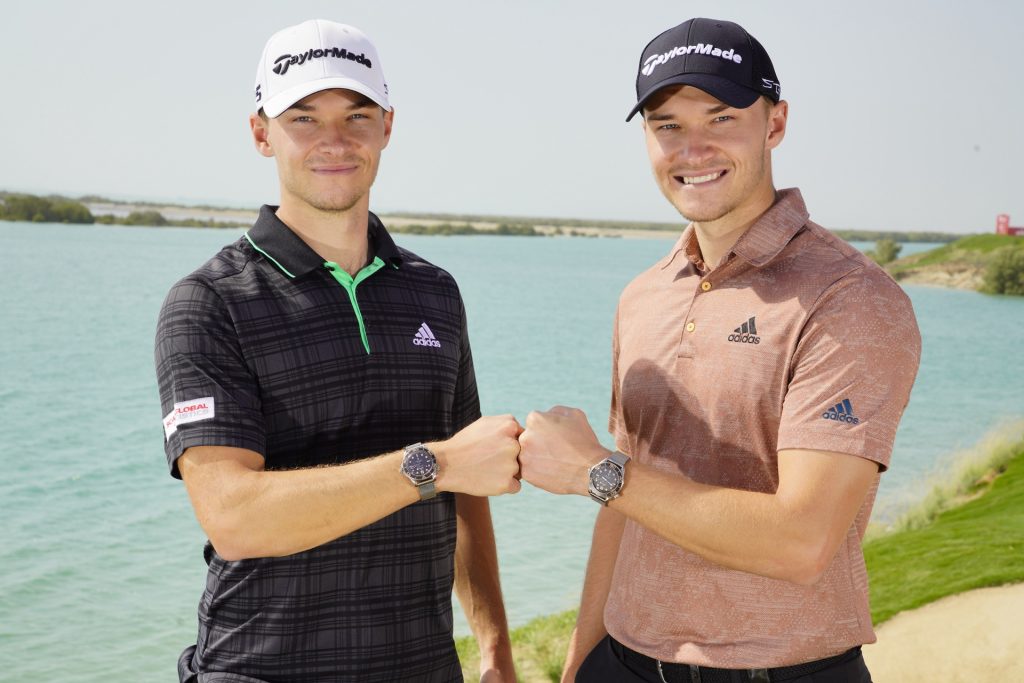 Manufacturing watches since 1848, OMEGA has become one of the most popular and recognisable brands in the industry, synonymous with pioneering spirit, innovation and precision.

They are well established in the golfing world as title sponsors of the OMEGA European Masters, partners with some of the game’s biggest names and also having created their own “Golf” collection of timepieces.

At age 20, the Højgaard twins have four European Tour titles between them and are both ranked in the Top 100 in the world.

Rasmus claimed his maiden victory at the 2019 AfrAsia Bank Mauritius Open, with his next wins coming at the 2020 ISPS HANDA UK Championship and the 2021 OMEGA European Masters, his biggest win to date.

Nicolai notched up his first title at the 2021 DS Automobiles Italian Open, where he held off firm challenges to close out the tournament and seal a one shot victory. In doing so, he joined the history books with his brother Rasmus, as they became the first set of twins to win back to back titles on the European Tour.

“I’m really excited to now be partnered with OMEGA and having won the OMEGA European Masters last year, there is already a strong relationship there”, said Rasmus. “I’m looking forward to seeing what the future holds together”.

“I’m proud to be joining the iconic team at OMEGA”, commented Nicolai. “Their high level of precision and attention to detail when it comes to their watches is exactly how I approach my own golf game and that’s what makes this a very exciting partnership for me”

Rasmus and Nicolai will both play a full schedule on the 2022 DP World Tour, as they look to continue their rise up the Official World Golf Rankings and etch their name in the top tier of world golf.

The prestigious Swiss watchmaker OMEGA was founded in 1848 and is recognized today as one the world’s leading timepiece manufacturers. For more than 170 years, OMEGA has been synonymous with quality, innovation and precision, defined by its pioneering spirit and conquests of the oceans and space – including its famous association with NASA and its role aboard every human mission to the moon. As well as this, no brand is more actively involved in sports timekeeping. In addition to partnerships in golf, sailing, athletics and swimming, OMEGA has served as the Official Timekeeper of the Olympic Games on almost every occasion since 1932. In watchmaking, OMEGA’s history has been dedicated to a tradition of excellence. This legacy continued in 1999 with the launch of the revolutionary Co-Axial escapement and, in 2015, with Master Chronometer certification – known as the Swiss industry’s highest standard of precision, magnetic resistance and chronometric performance.